Many Christian bakers have said no, and have been persecuted for their convictions. However, I thought this article was an interesting spin.

Jessica writes, “Jesus said, not only should you follow the law of the land — the law which in America for the most part prohibits discrimination against people because of their sexual orientation — not only should you do the minimum you have to do, you should go the extra mile. (Yes, that’s where that expression comes from!) Do *twice* what the law requires.”

So, in Jessica’s mind, that means Christians should not only bake one gay wedding cake, but two. 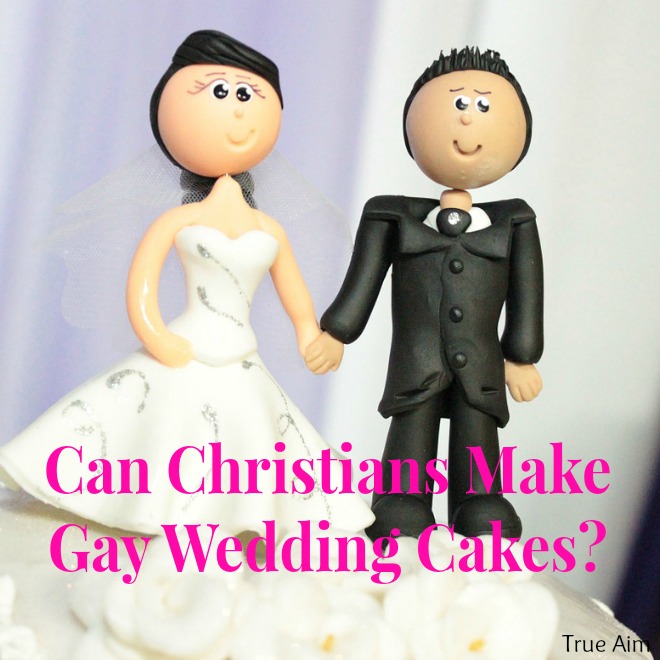 Normally, I would laugh an article like this off, but after reading the comments, I realized that a lot of well-meaning Christians were buying into this. It is really frightening to see the scriptures so blatantly misrepresented and then see Christians cheering her on. So here is my response to Jessica Kantrowitz.

First, are we to bake cakes to celebrate all sin, or just homosexual sin? I mean, if I am a baker and a man comes in demanding a cake to celebrate his adulterous relationship, I am to bake him two cakes?

Is this what Jesus would have Christians do?

Jesus tells the Jews to submit to taxation and offer to carry Roman soldiers’ bags a second mile. Neither of these are sins in and of themselves.

However, when Nero and Diocletian passed laws ordering Christians to sacrifice to Roman gods, the Christians refused. Hundreds of thousands were martyred, because they understood that God’s laws are higher than man’s. So, when they were ordered to celebrate false gods, they knew that they couldn’t.

Christian bakers have the same conviction.

They would gladly carry a homosexual’s bag two miles, and pay taxes to a pro-homosexual government. They would even bake homosexuals cake.

What they can’t do, is bake them a gay-wedding cake. At that point they are participating in the celebration of something strictly forbidden by God’s law.

I don’t think Jessica would advocate that Christians bake all sin-cakes. If it was a nazis cake, or ISIS cake, or beastiality cake, or cake to a false god, or whatever, I don’t think she’d want us baking the cake.

So, what is the difference? Why a gay-cake, and not a Nazis cake?

Well, Jessica doesn’t actually believe that homosexuality is a sin. She admits so in the her article saying “If you believe gay marriage is immoral (I don’t, myself).” So she wouldn’t be compromising her beliefs to bake a gay-wedding cake. But that doesn’t stop her from encouraging others to compromise their convictions, and then claims that doing so is Biblical.

But I bet if we found a sin she was against, like racism, murder, beastialty, idol worship, she wouldn’t bake the cake either!

See, this debate isn’t about “submitting to the law of the land,” it’s about whether homosexuality is a sin or not.

The Bible says that it is, Jessica says it’s not, and that is telling. Obviously, her faith isn’t guided by what the Bible actually teaches. Maybe that is why she takes the liberty to rewrite Matthew 5:41. But for those Christians who do believe in the Bible, we have no business baking gay-wedding cakes.

Her final argument is that if Christians would be more loving and accepting, we’d win more Christians. I agree that if we’d just give up the unpopular Biblical truths we’d be more popular, but then, when was popularity the point of Christianity?

Don’t be fooled. This isn’t about gay-wedding cakes. If these Christians baked them a gay-wedding cake, but said, “I will bake the cake, but I don’t agree with the lifestyle,” there would be just as much outrage.

The bakers would be called hateful and judgemental. It doesn’t matter if Christians wrap their truth in sunshine and cupcakes, the opposition will find it just as “hateful.” It isn’t you, your tone, or approach, that they find hateful; it is your truth!

« Why I Won’t Let My Kids Watch the History Channel
Joy Sprouts Preschool App: Get It Free! »