There are a lot of Christians freaking out right now because they think that the Supreme Court, by not ruling, has actually ruled in favor of redefining marriage.

That is what they want you to think; but nothing has changed.

Marriage is what it has always been, a Godly union between a man and a woman. The Supreme Court doesn’t have the power to change that. 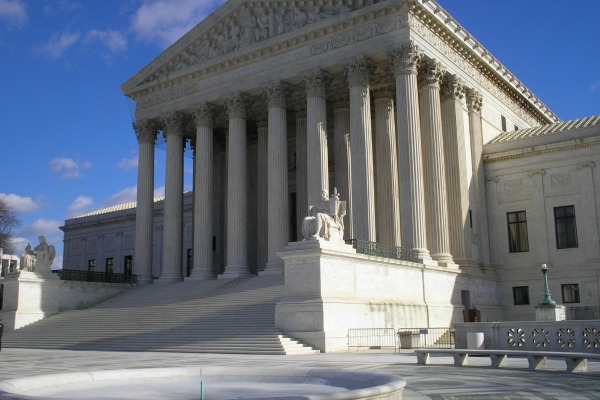 Sadly, most Christians in America are very confused. If you ask them what the highest law in the United States is, they will proudly proclaim, “the Constitution.”

Of course, they are wrong. That is the second highest law. The first is God’s law. And all the judges in the universe, even if they voted unanimously, couldn’t change God’s law.

These courts aren’t changing, but rejecting marriage laws. They aren’t upholding the law, they are breaking it. This isn’t new and progressive. It’s the ancient rebellion of man rejecting God.

Homosexuals can pretend that they can get married, but that doesn’t change marriage. Just like when the supreme court legalized abortion, it didn’t make the atrocity anything less than the murder of innocents – the same as Pharaoh and Herod, just on a much larger scale.

Sadly, most Christians, aren’t sure if homosexuality is even a sin anymore. With churches hardly addressing the issue anymore, and schools working over time to condition acceptance, it is no wonder.

So, why is homosexuality a sin? Here we go.

Whether you are Adam, Saul, Jonah, or anybody else, disobedience to God is a sin. You may not understand why you can’t eat the forbidden fruit, but you must obey, trusting that God who created all, knows what’s best for you. So did God forbid homosexuality? It couldn’t be clearer:

You shall not lie with a male as with a woman; it is an abomination.

Or do you not know that the unrighteous will not inherit the kingdom of God? Do not be deceived: neither the sexually immoral, nor idolaters, nor adulterers, nor men who practice homosexuality, nor thieves, nor the greedy, nor drunkards, nor revilers, nor swindlers will inherit the kingdom of God. And such were some of you. But you were washed, you were sanctified, you were justified in the name of the Lord Jesus Christ and by the Spirit of our God.

For this reason God gave them up to dishonorable passions. For their women exchanged natural relations for those that are contrary to nature; and the men likewise gave up natural relations with women and were consumed with passion for one another, men committing shameless acts with men and receiving in themselves the due penalty for their error. And since they did not see fit to acknowledge God, God gave them up to a debased mind to do what ought not to be done.

If a man lies with a male as with a woman, both of them have committed an abomination; they shall surely be put to death; their blood is upon them.

There are many other verses. You don’t have to be a Biblical scholar, you just have to be able to read to see that Scripture condemns homosexuality. The ancient Jews and Christians all understood that homosexuality is a sin, so don’t let the progressives twist God’s Word to fit their agenda.

Sadly, it is the homosexuals that will be hurt the most from this “ruling.”

Every form of sin is its own punishment. God, who is infinitely good and wise, created men and women to meet each others’ needs. He might have just created another man for Adam, but He created something different, understanding that she would best suit Adam’s needs and desires, and he her’s.

Instead of seeing the malcontent in their own community as a sign of their own bad choices, they imagine that it is society’s lack of acceptance driving them to the fringes.

If society would just condone and even celebrate their lifestyles, then they’d truly be free to live happily ever after in sin. But they will soon find on the other side of a marriage license, that what wasn’t meant to be, still won’t work.

Of course, they aren’t the only ones making the discovery. Straight couples have tried to form their unGodly lifestyle into God’s mold, and they aren’t fairing any better.

You can’t embrace no-fault divorce, abortion, pornography, strip clubs, prostitution, premarital sex, and cohabitation, and have a successful marriage. In other words, just being straight will not ensure a good marriage. You have to fit your relationship into God’s mold, and only then will it work.

Obama said, “Whatever we once were, we’re no longer just a Christian nation.”

He is right. God help us.