I already posted, The Dumbest Argument Against Homeschooling…Ever! so I’m calling this the Worst Excuse Christians make for Not Homeschooling!

Me:  Bob, I homeschool because God calls us to raise our children in the Lord.  How can I do that if they are at a secular school all day?

Bob:  Well, the Bible also says to let our light shine.  My child might be the only “Jesus” some kids ever see.

Me:  Bob, your 5 year-old can barely tie his own shoes!  Don’t you think he should grow into some spiritual armor before you send him into enemy territory? 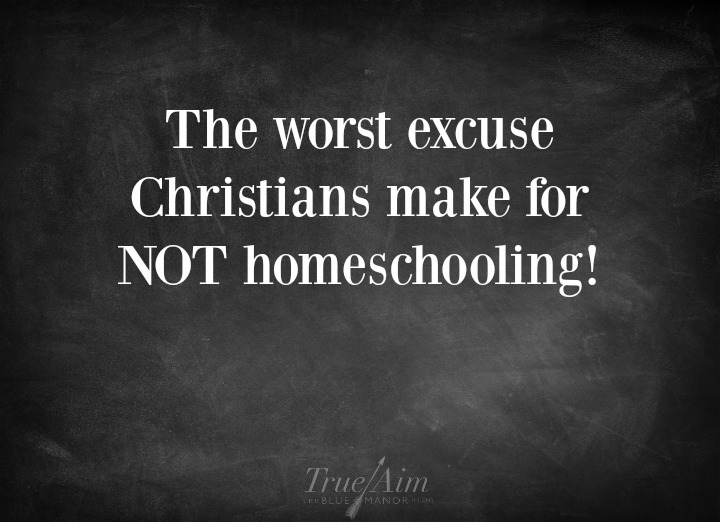 Me:  That’s exactly my point!  The world sends their children to an institution where God’s very name is forbidden.  Although we live in this world, we must not be “of” it – we must raise our children in the Lord!  And what greater testimony could there be to the secular world than every Christian family refusing to send their children to Godless schools?

Bob:  Well, I turned out alright.

Me:  Well that’s debatable.  And with 88% of Christian children in public schools leaving the church after graduation, you’re not only playing with fire – you’re forcing your children to play with fire, possibly hell fire!  If you want to sacrifice your children on the altar of government schooling, fine.  But, let’s not pretend that it’s for Christ’s sake!

I am not trying to attack anyone, just hoping to inspire Christian parents to reclaim their children for the Lord.  The enemy is winning the culture war because Christian parents are so willing to hand their children over.  All parents imagine that their children will be the light in secular schools, but according to the Southern Baptist Council on Family Life, 88% are dead wrong!  I’d love to think that my children would be the exception, but I can’t take that risk.  Especially, when 94% of homeschooled teens keep their faith!  For Christian parents, homeschooling should be a no-brainer!  Love to hear your thoughts.