You Can’t Keep Kids Away From Guns. When it comes to kids and guns, most parents think that as long as they keep the two separate, they’ve done their job. There could not be a more dangerous approach.

Guns are everywhere. You could lock your guns up, but the kids could find the keys. Or you might carelessly leave one sitting out. It would be a stupid mistake, but since when are we immune to stupid mistakes? Your kids may find guns at a friends house. Their friend might bring one to school. The avenues are endless.

So the best strategy is to lock your guns up, but assume that at some point your kids are going to find a loaded gun somewhere, someday. Accept that, and you will begin the transition from “reactive” gun safety to “proactive” gun safety. 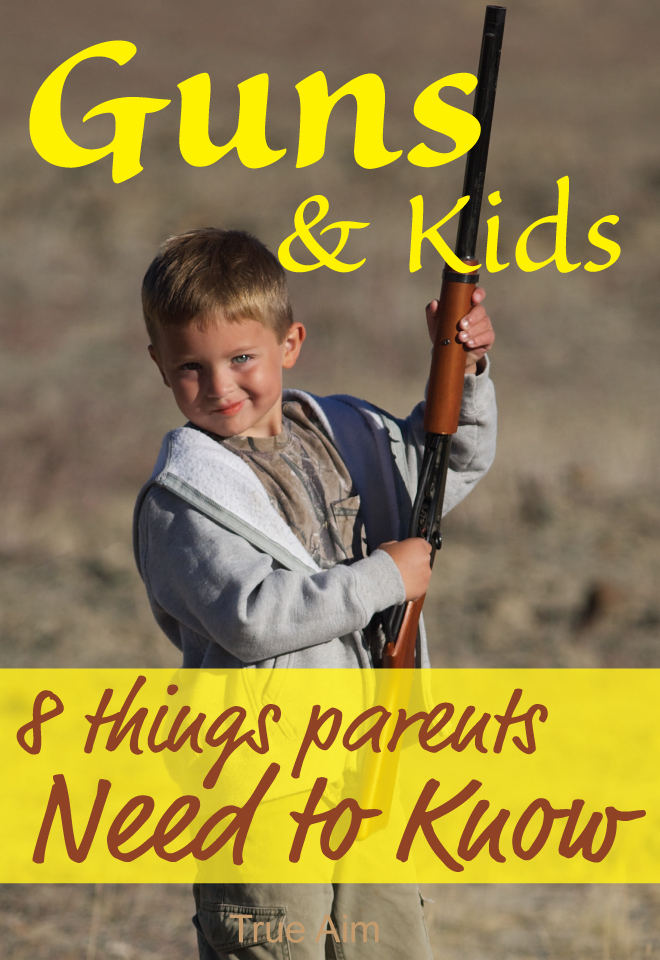 1. A Healthy Fear: You cannot teach your children gun-safety until you have given them a healthy dose of gun-fear. We don’t want kids terrified of guns, but we do want them to respect guns.

Kids are so used to being “over-protected”  that they might not take your “guns are dangerous” warnings too seriously.

You can tell your kids that, but I highly recommend showing them. When I was very young I used to hunt ground squirrels. One minute I’d be watching a cute little furry animal scurrying about, then I’d pull a trigger and he would have a huge, bloody hole in him. He was dead; it was final. There was no way to undo killing.

From that experience, you can be sure no one had to warn me to take gun safety seriously. So, the first gun safety lesson should be a demonstration. Take them hunting. This may seem like a traumatic initiation, but let them see what a gun can do to an animal, and they will be twice as careful when it comes to guns and people.

2. Are Toy Guns the Real Killers? The other day a five-year-old picked up a loaded pistol, pointed it at his grandmother and pulled the trigger. It all happened in seconds because he acted on habit and instinct. This ties into the last point, kids who don’t have a healthy fear/respect for guns are a danger to themselves and others.

And few things give kids a false sense of security than toy guns. The sole purpose of a toy gun is to have fun shooting your friends and family with it. If kids don’t understand the difference between a toy and a real gun, then it makes perfect sense for them to pick up a real gun, point it at grandma, and pull the trigger.

Helping kids recognise the difference is equally important. More and more toy guns are nearly perfect replicas of real runs. Instead of trying to teach young kids to distiguish between the two, they should just assume that it is a real gun, capable of killing, until they know for certain that it isn’t.

3. “One Rule” Gun Safety: There are many gun safety rules to teach your children, but most can be summed up in this one: A gun is always loaded, so treat it properly. This is my version of “Always treat a gun as though it were loaded.”

After nearly every accidental death, the shooters says, “I didn’t think the gun was loaded.” So as far as our kids are concerned, there is no such thing as an unloaded gun.

4. The Invisible Killer: Have you ever seen an action movie where the hero jumped behind a mattress just in time to stop a hail of bullets? That doesn’t really work, and kids need to know that just because that can’t see something doesn’t mean they can’t shoot it.

While you are explaining that to your kids, you might as well add that bullets can travel very far, like a mile or two far depending on what they are shooting. So, it is also possible to shoot things that are out of site.

5. The Good News is that Guns are Predictably Dangerous. There are a lot of things that are unpredictably dangerous, like dogs, weather, rivers, people, etc. But guns are predictable dangers.

They will never turn on you, unless you carelessly do the turning yourself. So, if you teach your kids gun safety and they follow the rules, they can just about eliminate the danger completely.

The reason that we hear so much  about gun deaths is because most news outlets have decided to join the gun-control campaign. And so, we never hear stories about gun owners successfully defending their property or person. They are only allowed to tell reports on guns when things go bad, accidents happen, or gun crimes are committed.

They could do the same thing to, let’s say, kids dying from bee stings, drowning, choking, or falling down, whatever they choose. And by reporting over and over the same terrifying stories society becomes paranoid about those things.

The percentage of children that die every year from gun accidents is very close to zero. In fact, it is much less than the number of children who drown in bathtubs, or in cars, or, well, you name it. But you won’t hear politicians calling to ban bathtubs will you?

7. If We Can Save One Child, it ISN’T Worth it. A while back, the Obama administration suggested that if gun-control laws could save just one child, they would be worth it. This is a silly argument, one that could be used to ban just about anything; legos, bikes, cars, medicine, etc.

And you might flip the argument around. If guns can protect just one child (or person) they are worth it.

8. Your Kids Need Guns, Especially Your Girls. Guns are the single greatest force equalizer in the history of the world. Take a third degree karate black belt and put him up against a 70-year-old lady with a gun, and guess who wins?

Yes, the criminals may use them too, but they will no matter what the laws are. But by arming yourself, you just leveled the playing field.

Guns are especially important for young women to have. In the past, being more vulnerable than men, women traveled (especially after dark) with a male escort for protection. Today, they can carry a gun and feel confident that they can match any criminals force with equal or more force.

This list is not exhaustive, just a good start. What are some of your thoughts about gun safety and children? What would you add to the list?