“Since it is so likely that (children) will meet cruel enemies, let them at least have heard of brave knights and heroic courage. Otherwise you are making their destiny not brighter but darker.” -C.S. Lewis

This is the follow up sequel to the original Character-Building, Family-Friendly Movie Nights for Kids. (Thank you for such a great response!) We recently got Netflix, and have had fun exploring a plethora of great flicks! 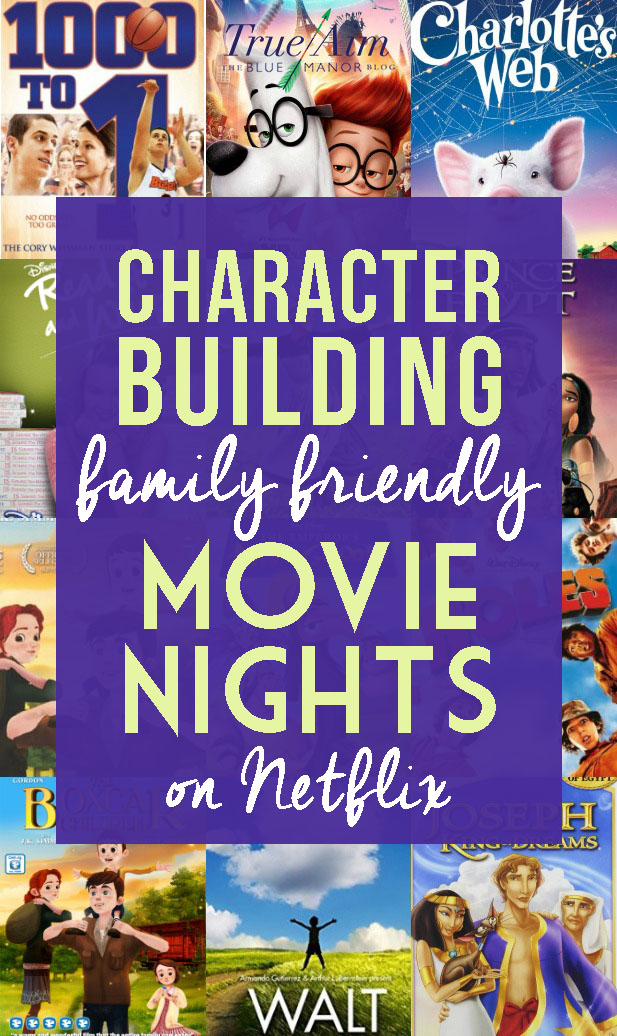 Charlotte’s Web – Wilbur is a young pig who befriends a wondrous spider, Charlotte. Filled with sweet lessons and beloved characters, this definitely is a classic for a reason.

Heidi (2015) – Based on the book, I haven’t seen this animated flick but this feel-good movie seems to be quality made and has positive reviews.

The Boxcar Children – The Boxcar Children was my favorite series growing up. Henry, Jessie, Violet and Benny are orphans running away from the grandfather. Along the way, they find an old abandoned boxcar. Through resourcefulness and teamwork, they call it home. I’m proud to say the movie did not disappoint. It closely matched the beloved book, and I felt it in no way was cheesy.

Fetch with Ruff Ruffman – This educational reality game show for kids is ran by an animated dog, but features real-life contestants who are sent on “missions” exploring different careers and professions, in a similar way “Magic School Bus” might. Growing up, I learned a lot through this show!

Joseph: King of Dreams – This is the biblical story of Joseph beautifully animated by the creators of the classic The Prince of Egypt. Lessons include trusting God, hard work, and perseverance.

Here is a list of common clean and positive movies for young kids that I wanted to mention in case you hadn’t seen a few on this list.

The Gabby Douglas Story – Gabby Douglas was only 16 when she brought home the gold at the 2012 Beijing Olympics. Here is her inspiring story of hard work and determination!

God’s Not Dead – Partially based upon real events, a Christian student and his atheist professor clash heads. Based upon the hit song, this film has some great messages of sticking up for your faith.

Holes – Stanley Yelnats, “cursed” from great great grandpa, is sent to Camp Green Lake for stealing a pair of shoes. (which he did not) While there, he discovers the warden has a secret – buried treasure! There is a smidgen of profanity and a bit of violence to worry about, but overall, a quality family movie with lessons on helping others. Based on the Newbery winner by Louis Sacher.

Read It And Weep – This old Disney Channel Original Movie was a favorite of mine growing up. After accidentally turning her personal diary into an essay contest, shy Jamie soon becomes a best selling author and the most popular kid in school – until everyone realizes the characters are based on them! Although some may disregard it as cheesy, it is a clean family movie, and has important lessons of being a good friend, honesty, and how words can hurt.

Cow Belles – Another classic Disney Channel movie that follows two spoiled sisters who learn the value of friendship, hard work, and helping others! (Same warning as above!)

Masterpiece Classic: The Diary of Anne Frank (2009) – Ben Kingsley stars as Otto Frank in this movie about Holocaust victim Anne Frank and her diary. Although I don’t think Anne Frank is the best example of Nazi persecution, it’s a good movie, not graphic, and the story of how blind hatred can affect normal people. It also shows the courage of Miep Gies and the others who hid Anne and her family.

Nicky’s Family – Nicholas Winton, known as the British Schindler, rescued over 600 children in the Kindertransport during WWII, by transporting them to Britain. Here is his story in a non-graphic documentary/docudrama form, that includes interviews with many of the children he rescued.

Gifted Hands – Dr. Benjamin S. Carson grew up with the world stacked against him – he was poor, black, and growing up in Detroit to a single mother with a third grade education. Through his mom’s hardworking determination and the grace of God, Carson went to Yale and became the first neurosurgeon to help successfully separate conjoined twins. Based off his incredible memoir, I felt this story did a pretty good job of converting Carson’s life to film.

Radio – Cuba Gooding Jr. excellently plays a developmentally disabled man in this light-hearted football drama that is based on a true story. A great family feel-good movie for tweens and up. (note some humorous uses of the S-word in one scene, and another scene where Radio unknowingly walks into a girl’s bathroom)

The Dropbox – Pastor Lee has rescued over 300 orphans and abandoned special needs babies throughout South Korea. Here is his incredible story and selfless life.

Monumental – I haven’t seen this yet, but it has come highly recommended. Kirk Cameron hosts this look at America’s past. If you liked this, you’ll also probably like Food Inc, a documentary exposing America’s food industry.

Facing the Giants – Grant Taylor, the head football coach at Shiloh Christian Academy, has yet to have a win in six years. After developing a new coaching philosophy, his life begins to change around.

Secondhand Lions – Growing up with his mom, Walter has known nothing in his life but instability and trouble. One summer, she dumps him off at his two eccentric uncle’s old place, where his life is changed forever. This coming-of-age film is one of my favorite films on this list, and has amazing lessons. The only negative in this PG-rated flick is there is some minor cursing (mostly d*mn).

Unbroken – Louie Zamperini grew up destined for trouble – until his older brother introduced him to track. Louie trained hard, and ran himself to the 1936 Berlin Nazi Olympics. When WWII broke out, he signed up to a 2nd lieutenant, and on a rescue mission, accidentally crashed. He and a friend survived 47 days at sea (with sharks and nothing to eat), and afterwards spent two years in a Japanese POW camp. After the war, his life spun downwards and he became an alcoholic, before committing his life to Christ and forgiving his captors.

My family has very low tolerance for sexual content, however we are more lenient on realistic war violence that does not glorify violence. I will list the pros and cons for each of the below movies.

Goering’s Last Secret – Herman Göring, Hitler’s second man, was one of the most infamous Nazis in WWII. In a stark contrast, his brother Albert was the exact opposite – who loathed the Nazi party and often subjected himself to danger to rescue people from concentration camps. Although he had the opportunity to become powerful, rich, and famous because of his brother – Albert chose a different path, and instead died penniless. It’s an intriguing and overall non-graphic look at two brothers who made drastically different life choices.

The Kite Runner – Based on the brilliant bestseller, The Kite Runner is a beautiful, yet heart-breaking story filled with family, friendship, loyalty, guilt, betrayal, and ultimately forgiveness and redemption. Amir is a successful writer living in San Fransisco, after moving there from Afghanistan in the late 1970s. However, memories haunt him of betraying a loyal friend, and Amir has a chance to make things right. The movie is rated PG-13, contains violence, some profanity, and is centered around a child rape. However, with powerful and poignant themes and a fantastic delivery, this movie is thought-provoking and eye-opening. I would highly recommend both the book and the movie. You can read my more detailed review here.

No Place on Earth – Incredible story of a group (ages 2-76) of 18 Jews during WWII who hid in an Ukranian cave. (They also set a world record for longest time underground interrupted.) I always think learning about other people’s lives is character-building, thought-provoking and eye-opening.

Call the Midwife – Although I cannot recommend the later seasons, we thoroughly enjoyed the first two seasons of Call the Midwife, based on the true memoirs of a British midwife in the 1950s. The series, similar in style to Downton Abbey, explore Britain’s poorest and lowliest memoirs of society.

Foyle’s War – This British 1940s mystery series is best for teens. Subjects often include murder and treason. Whether it is necessarily “character-building” may be up for debate, but contains good themes of good versus evil, and is a quality historical series that I honestly can’t help but include.

The Giver – When we hear about tragedy on the news, it can be easy to think, “Why does God allow evil?” In this adaption of Lois Lowry’s Newbery winning novel, meet Jonas – who lives in a perfect world. No crying, no pain, no war or heartbreak, and likewise no color, or differences, or happiness. The question is then asked: Is it better to live in a world of neutrality, or embrace both the good and the bad? A fantastic teen movie night that poses many questions and offers much discussion.

Movies I haven’t seen but that look good:

I haven’t had Netflix for too long, so I’m afraid my list isn’t longer. What are your favorite movies on Netflix? 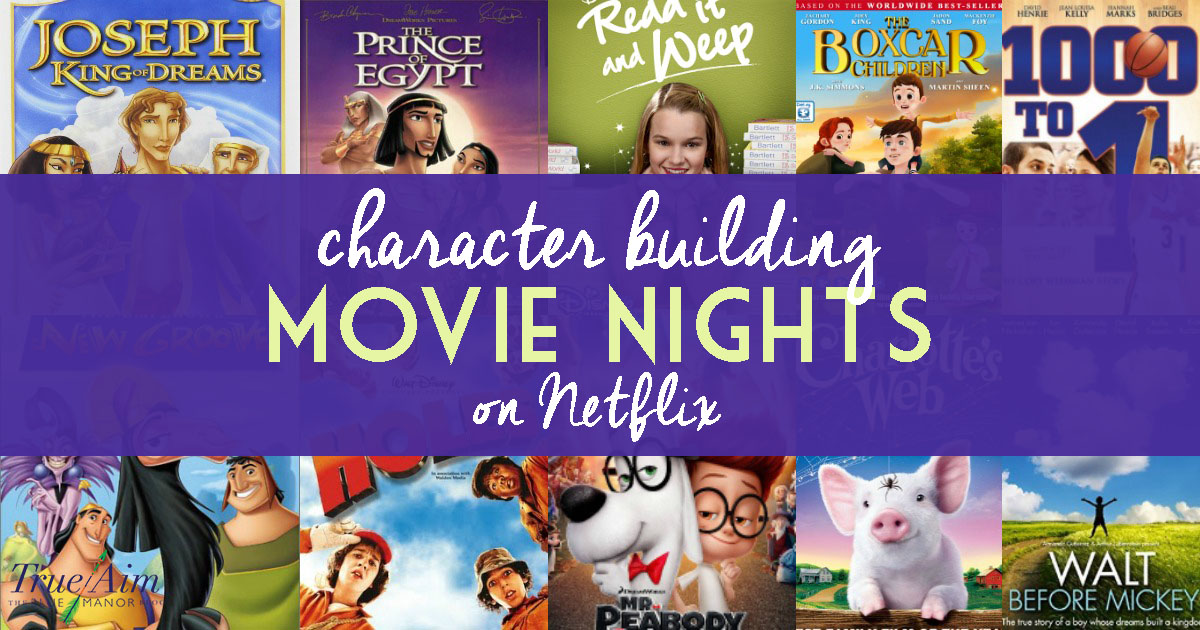