There is nothing better than a cozy family movie night. Nowadays, we are bombarded with low-quality, crude-humored or just plain awful shows for kids. Here is a great list of great quality, character building, family friendly movies! 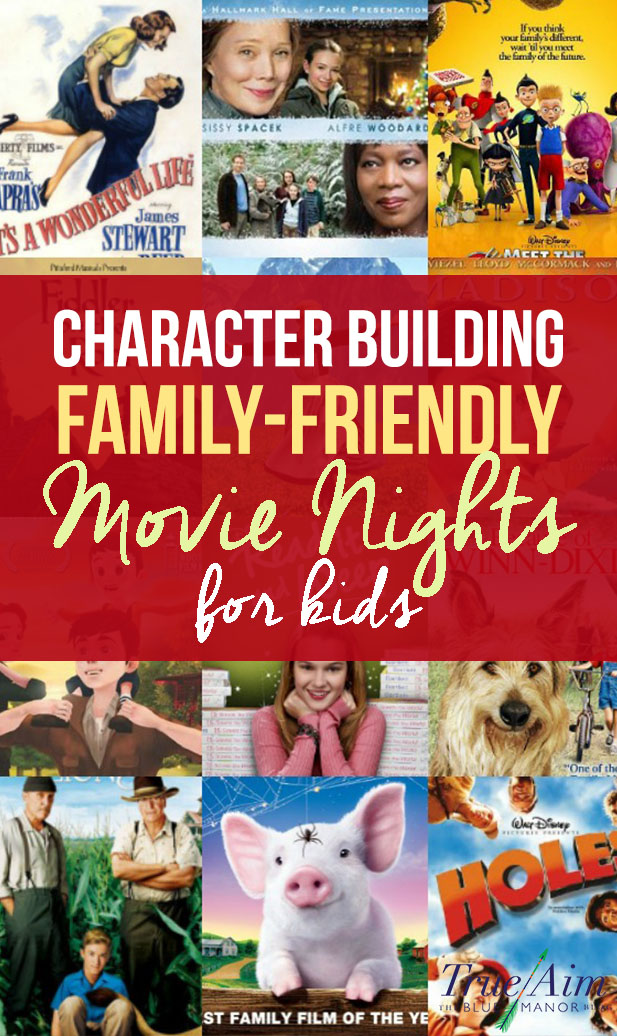 Family Friendly Movies that Help Build Character – For the Little Ones

Veggietales – G
Oldies but goodies; this animated talking-vegetable series explores many wonderful life lessons and Bible stories. Many of these are free on Amazon prime.

Cars – G
This Disney Pixar classic centers around a pompous race car, and how a humble little town changes his outlook on life. Speaking of which, all of the Pixar films are great family films that can be enjoyed by kids and their parents.

The Emperor’s New Groove – G
This has always been one of my favorite movies. Kuzco is a self-centered emperor whose life gets turned around by turning into a llama by the evil Yzma, who wants to take over the kingdom. With help from a humble peasant, he is determined to get himself changed back into a human and overthrow Yzma’s “reign.”

Meet the Robinsons – G
In this fantastic Disney flick, Lewis is a 12 year-old orphan with a brilliant scientific mind. One day, he gets inspiration to build The Memory Scanner, a device to let him see his birth mother, and potentially ask her not to give him up. Animation and acting are great, but the biggest take-away I got from this is the message – Keep Moving Forward, and it does show how failing to do so can make you a miserable person. Brilliant message so many adults have yet to learn. (The very last Dystopian scene may be a little scary for younger kids.)

Valiant – G
Valiant is the first animated film I have seen with facts at the end. Set in 1944 before D-Day, this British Disney film is about Britain’s messenger pigeons during WWII. In the end, we learn pigeons played a bigger role in the war than horses, dogs, or cats. Filled with adventure and some humor, it is a bit violent for a G-rated film, but it is definitely a great movie. There are a lot of WWII references that are used appropriately, but younger kids will not understand it.

Big Hero 6 – PG
Part Marvel comics, part Disney, part Anime – the themes of Big Hero 6 are family, friendship, and working together, and has a plot all ages can engage in.

Because of Winn-Dixie – G
AnnaSophia Robb stars as Opal, the daughter of a single-dad pastor. One day, she meets a stray dog, Winn-Dixie, that changes her summer drastically!

The Boxcar Children – G
The Boxcar Children was my favorite series growing up. Henry, Jessie, Violet and Benny are orphans running away from the grandfather. Along the way, they find an old abandoned boxcar and call it home. I’m proud to say the movie did not disappoint. It closely matched the beloved book, and I felt it in no way was cheesy. The animation reminded me of a video game.

The Torchligher’s Series – G
This Christian series features courageous men and women in history, and what they’ve accomplished. Heroes featured included Jim Elliot, William Booth, Corrie ten Boom, Amy Carmichael, and John Bunyan. I’ve seen the Corrie ten Boom one, and we quite enjoyed it. Many of these films are free on Amazon Prime.

Read It And Weep – G
Read It and Weep is a Disney Channel Original movie about a young girl whose private journal accidentally goes viral. In typical Disney fashion, the acting and video quality may not be the greatest, but its a squeaky clean film about friendship.

These are generally good movies for the whole family, but may have themes not really appropriate for the super younger ones!

The Prince of Egypt – PG
I can’t say I fully appreciated this movie until watching “The making of The Prince of Egypt.” Beautiful animation, fantastic voice actors, and a stunning soundtrack. This is the story of Moses, and his journey from the prince of Egypt to God’s leader for His chosen people.

Fly Away Home – G
Fly Away Home opens with young Amy and her mom – happily in a car. Suddenly, the car crashes – and soon her beloved mother is dead. Amy wakes up in the hospital to find her father – who she hasn’t seen since her parent’s divorce nine years ago – and now he is her guardian. Through love, patience and time, Amy and her father adopt an orphaned gaggle of geese, and come fall, are determined to bring them south by air.

Madison – PG
Based on a true story of hydroplanes in the little town of Madison, Indiana, this inspiring father-son tale shows the fruits of hard work and perseverance!

It’s a Wonderful Life – G
In this classic, George Bailey ponders what life would have been life if he was never born. His guardian angel appears and brings that question to life. Although it may be a bit slow for squirmy younger ones, it definitely is a fantastic and clean family film!

Woodlawn – PG
Inspired by a true story, this Christian football film tackles racism in the 1970s, and has strong messages of hope and faith. As a bonus, I was pleasantly surprised with the film quality and acting, which I thought were great!

When The Game Stands Tall – PG
When the Game Stands Tall is the opposite of most football movies you see; De La Selle High School has a record-breaking 151 consecutive wins – before losing miserably. It is Christian/Catholic based, and is not your typical “it’s not about winning” family sport flick. Instead, at its core is a coach who believes building character and teamwork is the most important.

Newsies – PG
Partially based on a true story, this Christian Bale musical sheds light on the Newsie strike in the late 1800s. (Unfortunately, the real life strike was only a partial success!)

Secondhand Lions – PG
This under-rated coming-of-age gem centers on everything that’s good in life – courage, loyalty, honor, kindness, and so much more. Set in the 1960s, timid young Walter (Haley Joel Osment) gets to spend the summer with two mysterious uncles – rumored to have millions in fortune. Although it has many uses of minor profanity (dam*), I cannot recommend this enough.

Remember the Titans – PG
Denzel Washington stars in this incredible classic football film. The year is 1971. After leading his team to 15 winning seasons, football coach Bill Yoast (Will Patton) is demoted and replaced by a black coach – Herman Boone (Denzel Washington). These two men overcome their differences and turn a group of hostile young men into champions! A great film dealing with notable subjects.

Fiddler on the Roof – G
Traditions!! This classic musical revolves around Tevye, a poor Jewish milkman and his five daughters. A great story about love, traditions, and ultimately, letting go.

The Buttercream Gang – NR
I haven’t seen this movie yet, but it looks good. Summary: Scott and Pete are members of the Buttercream Gang, a group of pre-teen friends who do good deeds for their neighbors in their small Utah town. When Pete goes to live with his aunt in Chicago, he falls in with a bad crowd and joins a gang. Upon Pete’s return to Elkridge, Scott notices the change in his friend’s behavior and determines to intervene with the help of the Buttercream Gang!

I Am David – PG
Based on the Danish best selling novel, I Am David is the story of a 12 year old boy who escapes a Stalinist labor camp. Purposefully, there is no sexual content, no profanity, and very little violence; making it a great family film. Even with its low budget, the acting is incredible, and it has many notable themes of courage, perseverance, faith, hope, and love.

Pictures of Hollis Woods – PG
This Hallmark Hall of Fame film has the same feel-good, family feeling as most of Hallmark’s movies, but has a higher quality with an amazing plot and cast. Twelve year-old orphaned Hollis has known nothing but rejection and hurt all her life. When she does find a family where she feels she really belongs, tragedy strikes and once again Hollis runs from her past. It isn’t until she meets Josie, a kind, elderly widow, where she truly begins to heal – but all too soon trouble begins again. What will Hollis do? This is based off the wonderful Newbery Honor book with the same name.

Gifted Hands – PG
Dr. Benjamin S. Carson grew up with the world stacked against him – he was poor, black, and growing up in Detroit to a single mother with a third grade education. Through his mom’s hardworking determination and the grace of God, Carson went to Yale and became the first neurosurgeon to help successfully separate conjoined twins. Based off his incredible memoir, I felt this story did a pretty good job of converting Carson’s life to film.

One Night with the King – PG
“Perhaps your were born – for such a time as this.” Young Hadassah, a Jewish girl, turns into Queen Esther of Persia practically over night. Despite this, the evil Haman is plotting against her and her people. This is the biblical story of Esther, created beautifully! (PS I watched The Book of Esther and I unfortunately have to say it was terrible in every way – acting, set, and some parts were so biblically un-accurate it made us laugh.)

The Sound of Music – G
Doe, a deer, a female deer! Julie Andrews stars as Maria von Trappe, a young, fun nun who, searching for adventure, becomes the governess to seven crazy children. This is an incredible classic that seriously everyone needs to watch.

The Chronicles of Narnia: The Lion, the Witch, and the Wardrobe – PG
How could I forget this C.S. Lewis classic? Four British children, stuck in WWII, enter a magical wardrobe and enter a land called Narnia. Filled with adventure, faith, hope, love, and lessons of good and evil, definitely a must-see for those old enough!

Front of the Class – PG
This Hallmark Hall of Fame film tells the true story of Brad Cohen, a young man who battles tourette’s syndrome and becomes a teacher! A really great inspirational film showing that you can do anything you put your mind to!

Holes – PG
Stanley Yelnats, “cursed” from great great grandpa, is sent to Camp Green Lake for stealing a pair of shoes. (which he did not) While there, he discovers the warden has a secret – buried treasure! This is based of the Newbery Winning book. There is a smidgen of profanity and a bit of violence to worry about, but overall, a great and fun family movie!

Also check out these Historical Movies for Kids, many of which contain character-building themes!

What are some of your favorite character-building, family-friendly movies? List them below! 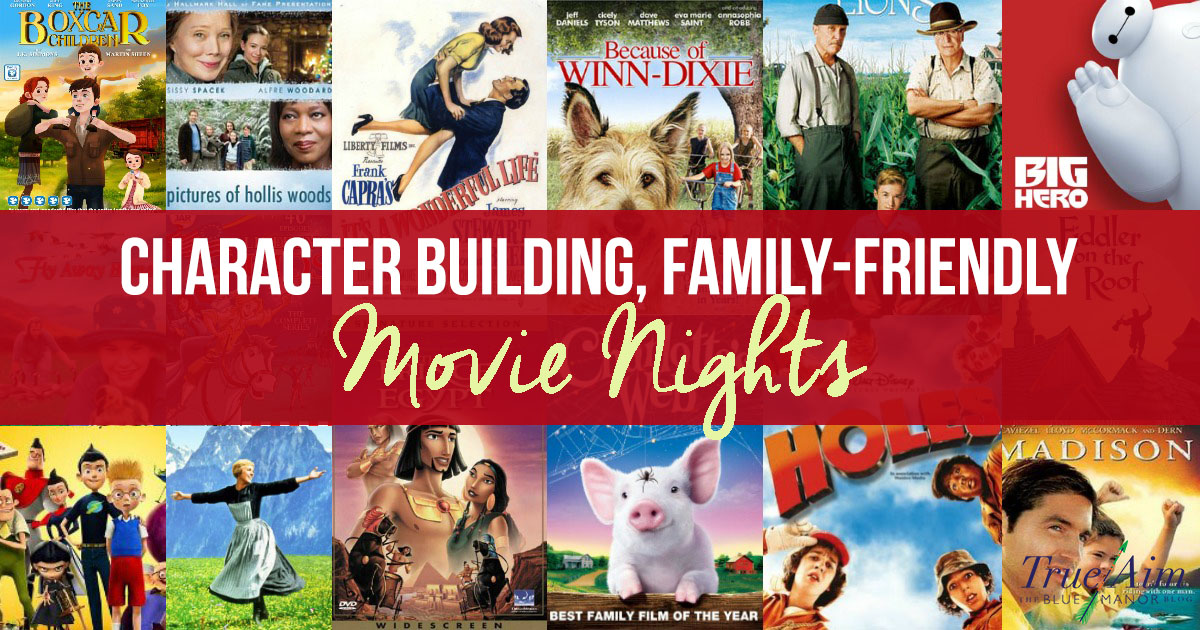