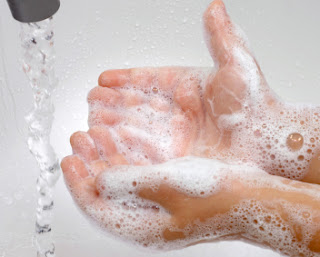 I really am torn on this one.  To what degree should children be exposed to germs? (Read More For Poll)
On one side, I am reminded that children have a immune system for a reason.  I mean really.  Young kids have run around putting everything they find into their mouths for thousands of years.  Some would say that this is nature’s way of exposing children – helping them build a robust immune system.  My husband’s grandfather used to tell him, “Ah, don’t worry about it.  Everyone eats a pint of dirt before they die.”  This statement was used to justified eating or handling something dirty.  And he is not alone.  I know lots of people who intentionally leave their children’s playroom un-sanitized in order to expose their children.  Is this practice similar to giving a young child several immunizations?  The purpose of immunizations is to intentionally expose children so that they can build immunity to the disease.  Proponents of this would argue that not exposing your children can actually cause increased sickness and health issues for the rest of the children’s lives.
On the other hand, before the practice of sterilization was discovered, didn’t lots of people die from common germs?  Aren’t doctors and healthcare providers always encouraging the public to wash their hands?  The question is how much is hype, and how much is over-protective?
The funny thing is that I have always been more inclined to think with the “let them eat dirt crowd, ” but act with the “sanitize everything crowd.”  The answer probably lies some where in between, but does it lie closer to “let them eat dirt” or “sanitize everything.”  I would really appreciate your feedback on this one.  So if you have an opinion or helpful insight please leave a comment.  Also, please take the poll below.  Do you fall more into the “let them eat dirt crowd” or the “sanitize everything crowd?”