Our children are best friends – not by coincidence, but by design.  My husband and I put lots of effort into making sure our children learn to love and respect each other, but it was not until we had a break through that they really started to get it.  I wish I could say that their compassion flowed naturally from their precious hearts, but that is not how it happened. 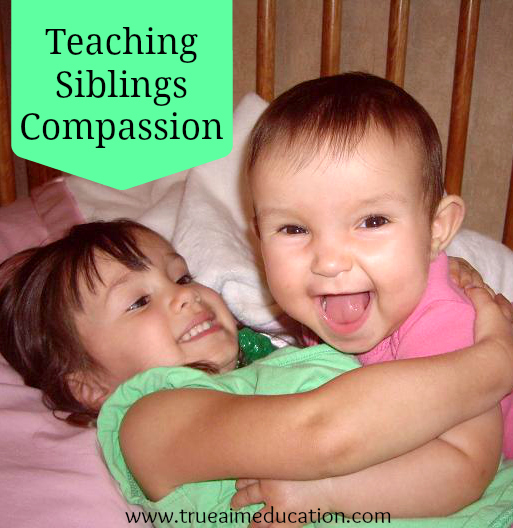 It was the week of tattling, bossing, hitting, hoarding toys, hiding toys, name calling and tempers.  Every time I blinked, a crime had been committed, was being committed, or was just about to be committed.  We spanked and lectured, “You two are sisters.  You are best friends and need to love one another.  You should want your sister to have the better toy or the bigger piece.”

Our two beautiful girls would nod and share just long enough for me to step into the next room.  Then, the battle would go on like nothing had happened.  They just didn’t get it.  They just could not understand why it was better to give up their favorite toy, the bigger piece, or the better place.  They saw no benefit in putting others need and wants above their own.  Then their Dad stepped in…

Like every other time the girls were already pointing fingers, “She is being bossy! and “No, she was being mean first!”

“It sounds like you are both guilty.  Audrey you are being bossy and Emma you are not listening to your older sister.  So, I am going to spank you both!”  My husband, first looked to Emma and asked, “Emma, how many spankings should I give Audrey?”  My little three-year-old smiled, “Five!”  Five is a lot.  We usually start with three and go from there, so Emma knew she was being extra cruel.  Audrey protested, “No, that’s not …” but my husband cut her off.  Next he asked Audrey, “Audrey, how many spanking should I give Emma?”  We expected to hear at least five, but Audrey answered, “three.”

“OK,” said Dad, “Come here Emma, for your five spankings.”  Now it was Emma, who protested, “No, Audrey gets five.”  My little Emma who had smiled when she thought that her sister Audrey was going to get the five spankings, now burst into tears as she realized that by condemning her sister – she had condemned herself!

It was a hard way to learn compassion, but my girls (especially little Emma) learned for the first time, what it feels like to be on the receiving end of their own ruthlessness.  Today my girls really are best friends and their fights now the exception – no longer the rule.