My wife and I were naive newlyweds when it first happened. I had just finished a 12 hour shift of high-intensity, straight-commission, last-minute-Christmas, retail sales. The doors opened at 10am, and I ran from customer to customer until the lights were flipped off at 10pm.

I hadn’t had a sip of water or bite of food since breakfast. I felt sick and my legs ached. I wanted to head home, but I still had to catch the tail end of a Christmas party. 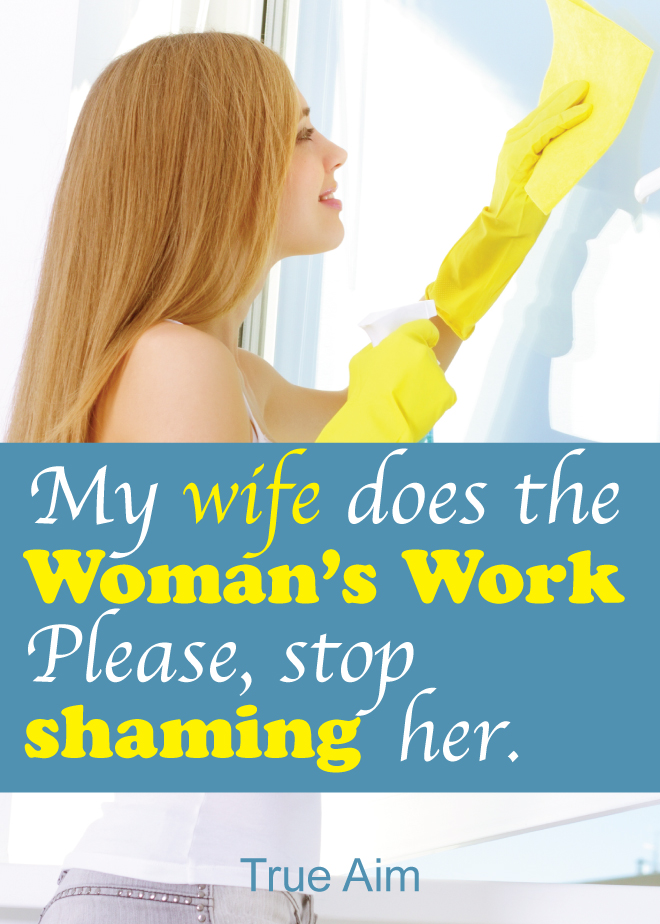 My wife had long since eaten and was playing card games when I entered. I practically crawled over to her, rubbing my temples trying to soothe a pounding headache.

Being that she loved me, had already eaten, and hadn’t just worked a twelve-hour shift, she innocently did the unthinkable; she offered to get me something eat. Luckily, no one heard her. But then, I did the unthinkable. In my delirium, I said, “Could you just get me a glass of water?”

Several women looked up from their game. One said, “Oh for heaven’s sake, get your own water!” Several chimed in, attacking me for such a wild and reckless display of chauvinism. Others surrounded my wife, explaining to her that she didn’t need to “serve” me, encouraging her to stand up to herself.

And I will never forget that last, oh-so-telling remark flung at me, “You should get HER a glass of water!”

This was only the beginning. There seems to be an endless stream of people who feel the need to champion equality. If they see my wife doing the dishes, they feel it is their duty to inquire whether I have done my half. When they catch my wife changing diapers, they feel it their right to know when was the last time I had changed a diaper. These constant insinuations that I am a chauvinist really just spur me on.

The hypocrisy doesn’t bother me. Never once has a person seen me mowing the lawn, or shoveling the snow, cleaning the chicken coop, moving furniture, fixing the fence, taking out the garbage, etc. and stopped to ask whether my wife had done her half. Apparently, equality means, I’m supposed to do ALL the man’s work, and half the woman’s work.

Oh, but excuse me, I just uttered a blasphemy! How dare I say WOMAN’S WORK! Is a man too good to change a diaper, or wash a dish?! Is he too proud to cook dinner or vacuum the floor?!

Of course, not. My wife does the woman’s work, because I am a gentleman and let her. She likes to cook, but doesn’t enjoy scrubbing toilets. So of course, I clean the bathrooms. She doesn’t mind diapers, but hates mowing the lawn. As it happens, I mow the lawn.

To be fair, it isn’t all about my wife. There are things that we both hate. For instance, we both hate washing the dishes and cleaning the chicken coop. In this case, my wife sacrificially does the dishes and I sacrificially clean the chicken coop. And when one of us is overloaded, the other steps in to pick up the slack. We are a team. And if my phrase, “woman’s work,” is ruining your sense of worth, then I can change it. I can call it “Janine’s work.” That way you don’t think I’m suggesting that ALL women should be forced to do the SAME work.

But remember, the reason some jobs became referred to as “woman’s work” and others “man’s work,” wasn’t due to scheming patriarchs, conspiring to make their wives miserable, but because it was work that most women, or most men, preferred. And if some of us still prefer it, why should we be bullied?

Besides, as her husband, I care more about my wife’s wellbeing than all the feminists combined ever could!