I am tired of hearing that spanking is child abuse. This un-Biblical viewpoint seems to be growing in popularity, with some states even setting out to ban the discipline method altogether. So called “child psychologists” quote unnamed, vague studies that claim to “scientifically prove spanking is abusive.”  This has many Christian parents questioning themselves and their methods.  Below are 2 points that I hope will give parents some reassurance that spanking is not child abuse. 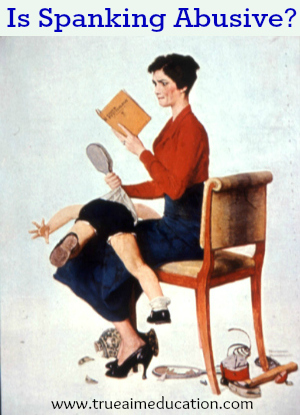 Using similar logic I could argue that nearly anything is abusive.  For example, I could point to a mother who starves her children to death and then draw the ridiculous conclusion that forcing a child to skip a meal is child abuse.  Or, I might point to a mother who drowned her children in the tub and then argue that forcing children to bath is child abuse.  I could take a father who verbally berates and curses at his children, and then use it a proof that scolding children is child abuse.  Or, I could tell you about parents who chained their children up in locked rooms and then use that example to condemn groundings and time-outs.

Of course, all these arguments are intellectually dishonest, but that doesn’t stop the “no spanking” crowd from terrorizing loving parents with their vicious rhetoric!  They love to point to instances of horrific child beatings and then tie them to all parents who spank.   There is a huge difference between “spanking a child” and “beating a child!”  No one is for “beating children,” but don’t tell me spanking is the same thing.  If you can’t see that, then don’t spank your children, but stop telling everyone else that they are committing child abuse!  It is Offensive!  WE DO NOT ABUSE OUR CHILDREN!

Hopefully, these two points will give you some reassurance that spanking is not child abuse.  Now the questions are:  “Does spanking work?”  “Is spanking the best form of discipline?” “Is spanking Biblical?” and “Is there a spanking technique that works best?”  My answer to all of these is YES, but I will go into all that in a later post.

I realize this can be a polarizing issue, so I would love to hear what the rest of you think about spanking.  If you have an opinion, please leave a comment.