Penguins are so cute! We recently did a penguin book and ornament activity, our favorite animal, and thanks to my Schwan’s man for the idea, I put together Penguin Ice Cream for my kids to go along with it. 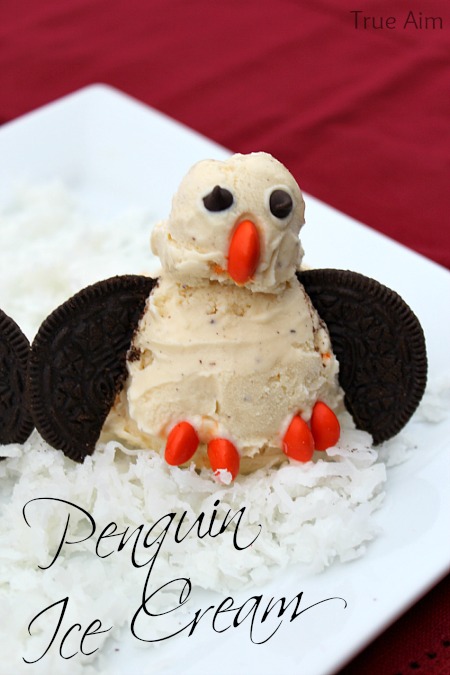 There’s something magical about making food look like characters or animals. It can be the same old food, but dress it up in a different way and it’s like new!

How to Make Ice Cream Penguins

The best thing about this is that it doesn’t take much time. To make these little guys I used:

First, I put shredded coconut down for the snow. Then, to make the bodies I used a regular Ice Cream Scoop, one that had a release lever, and for the heads I used a large melon baller and sprayed it with cooking spray so the ice cream would come out. If you have a cookie scoop with a release lever, that would work a lot better.

I got rid of the cream, (Guess how), in the Oreo and cut both wafers in half for the wings. For the feet I used 4 orange M&Ms and cut those in half to. For the eyes I used the mini chocolate chips, and for the beaks I used 1 more orange M&M. 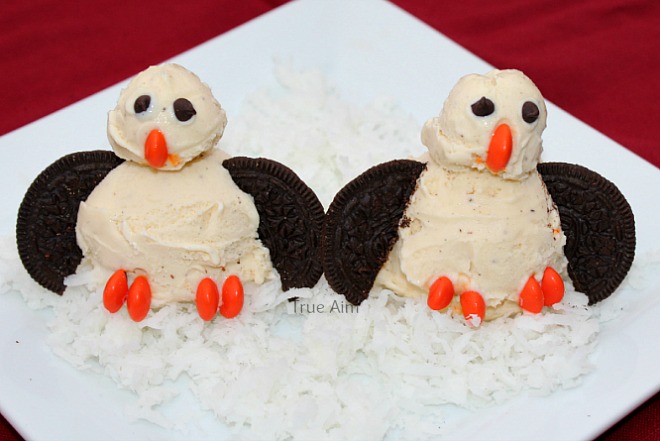 It actually tasted quite good with the coconut. Next time I would get some gummy fish and put them all around! How cute would they be for a penguin party? To make them single serve, you can just use muffin liners on a pan and make them ahead of time. Then serve them up on plates with cake!

What kind of things would you add to make your penguins even more fun?