Sometimes activities don’t always go as planned. I thought our Penguin Footprint Ornaments turned out great, but I was really disappointed with the storybook that I had picked out to go along with it. 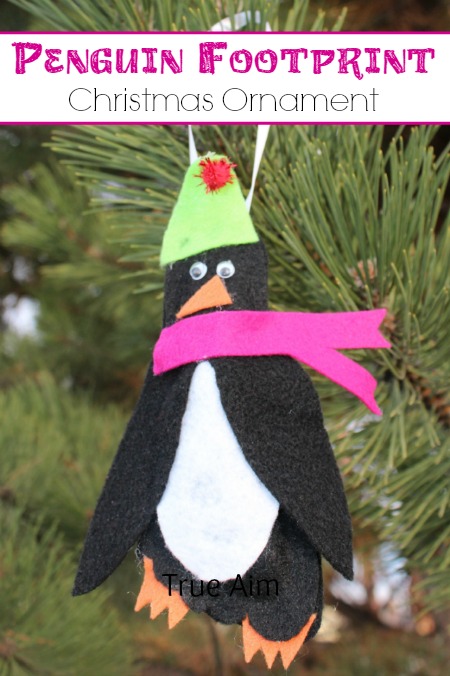 This post contains affiliate links that helps support this site.

I tried Piddles the Penguin. What a cute book! What a terrible story. So, we passed on that one and I looked at Tacky’s Christmas. Well, the Tacky series is OK, but it always talks about the bad hunters. While I know there are bad hunters, I don’t really like books that try to propagandize my kids into thinking all hunters are bad.

I had enough of the bad penguin book choices so I went with a book about real penguins. They are just so much cuter than the illustrated ones! 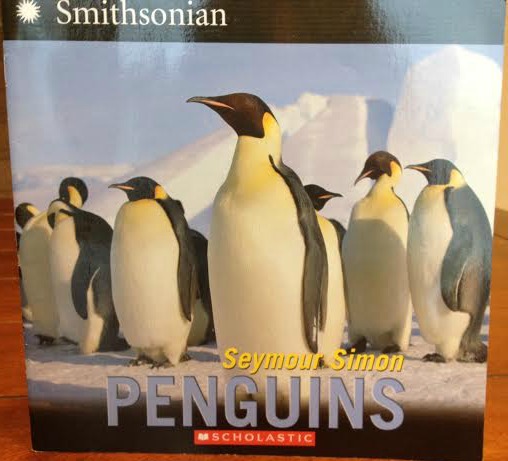 This was a perfect choice for my daughter who is 7. She loves learning about the life of real penguins, what they eat, how they live in the cold without a hat and scarf. 🙂 It turned this craft into a learning activity at the same time. Now, I can quiz her on the things she learned in the book using her penguin footprint ornament!

How to Make a Penguin Footprint Ornament

I did a similar penguin craft with paper, but we put them on sticks and made them into puppets. When I was in highschool my piano teacher knew how much I loved penguins and she got me this cute stuffed penguin Christmas ornament (my favorite ornament of all time), but it started to fall apart finally after like 10 years. So I decided to blend the two together. 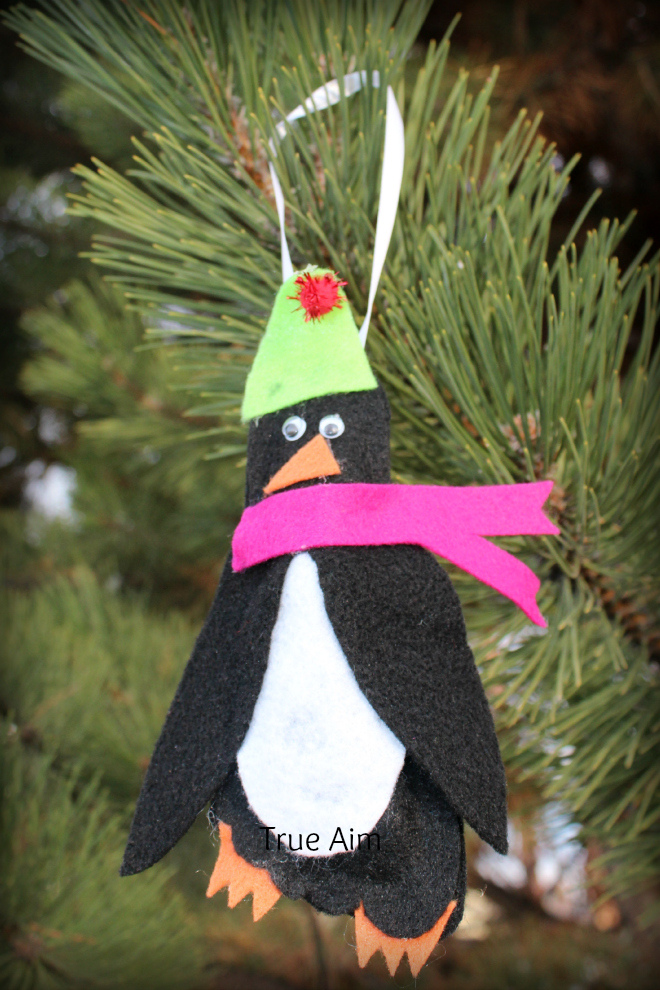 Here’s what you’ll need to make your penguin ornament:

First thing we did was trace Audrey’s feet on the black felt with chalk for the body and cut them out. If you are going to stuff your penguin you will want to trace both. You don’t have to stuff it and make it flat by using one foot, but my daughter thought the stuffing was so cool; like we were making a stuffed animal. 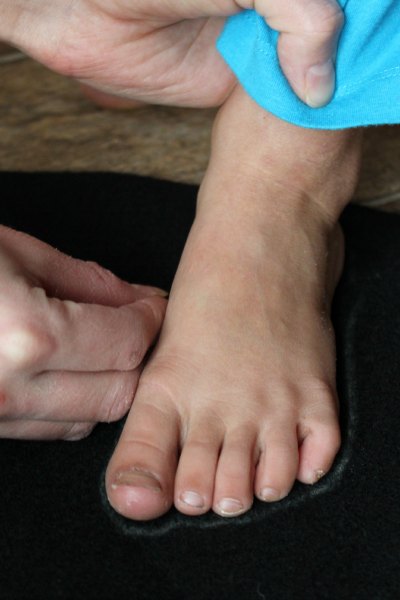 Then we drew wings on the black felt and an oval on the white felt for the tummy and cut those out. Finally the beak was just a corner of felt cut off and I just made little orange claws for the feet; no drawing needed. 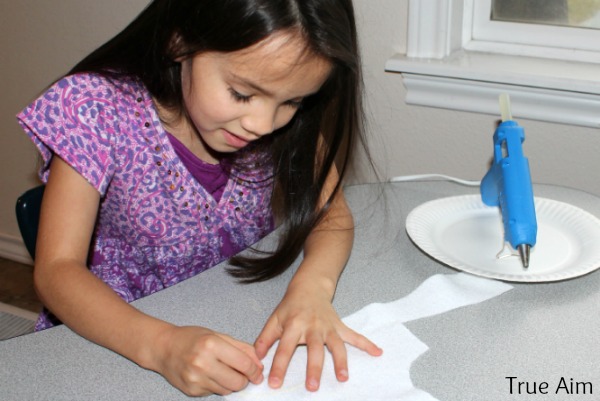 Audrey tried to cut the felt, but our scissors weren’t very sharp and she was having a hard time, so I did the cutting. She did do the gluing though.

She glued everything on the front and then turned it over and glued the feet and ribbon to the back. The only tricky part for her was to put glue on the edge of the back of the body so she could put the second black traced foot on and stuff the penguin. I told her just to do a little glue at a time. It worked! She did fine and left a hole at the bottom to put stuffing in. If you are using glue, you will want to let everything dry before you put the stuffing in. 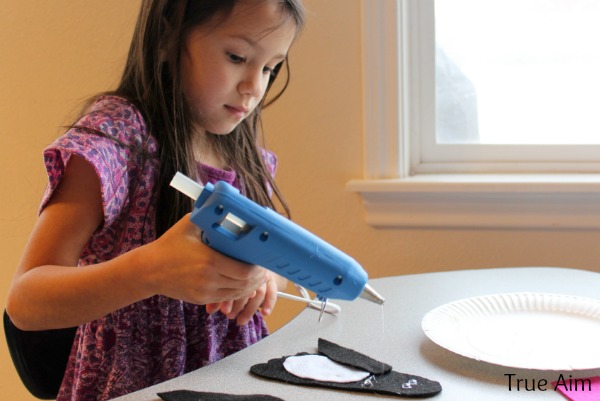 I loved watching Audrey do this project because she was improvising as we went along, since I didn’t really know what to expect because I had never done it before and wasn’t following any directions. She couldn’t get the stuffing down in the head far enough with her hand so she figured out that using a pencil would work to help her stuff it. 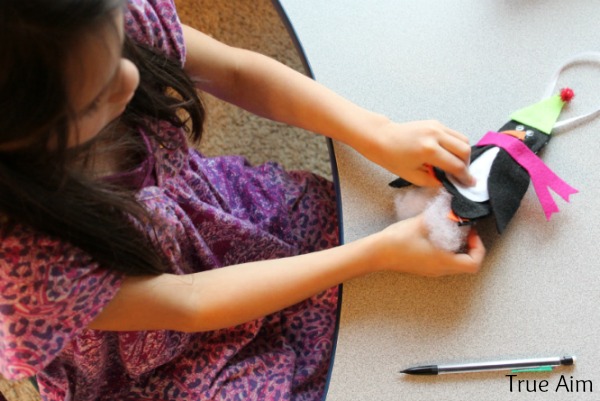 She glued the bottom up after she thought there was enough stuffing and we were done! The only problem was, we ran out of black felt and couldn’t make anymore! I’ll have to get some at the store and make some with my other children, because they are just so cute. 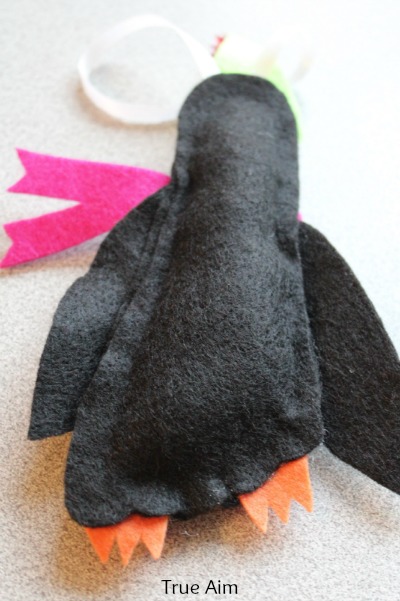 I dated the ribbon and put Audrey’s name on it so we would know when her feet are much larger, whose ornament it is with such cute little feet. 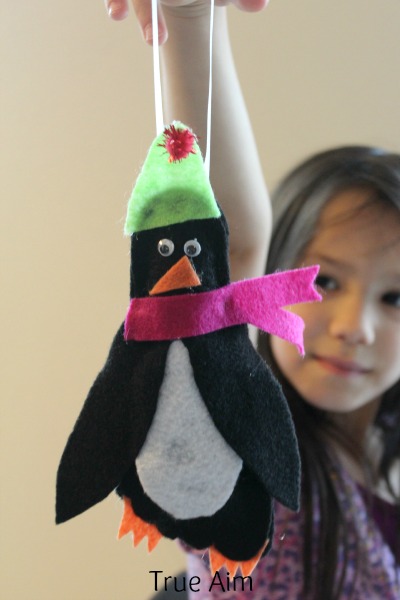 70+ Kid Made Ornaments Inspired by Books

I’ve joined a big group of Kid Bloggers to feature kid-book inspired ornaments and I bet your favorite book is in the list!  Hosted by Melissa over at Mama Miss! Make sure you check it out! 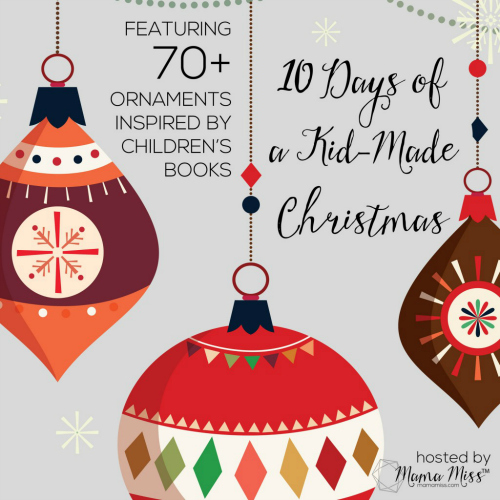